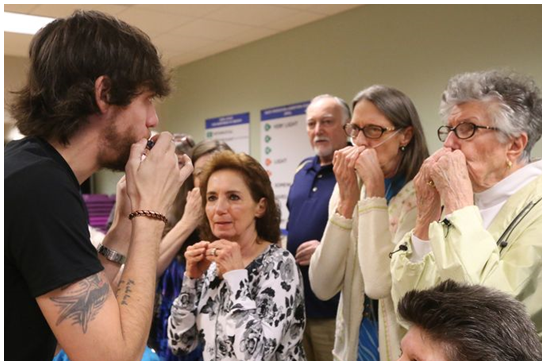 Encino, CA (March 25, 2016) – ACM Lifting Lives ®announced today a new partnership with the Chronic Obstructive Pulmonary Disorder (COPD) Foundation to start a pilot program called Harmonicas for Health. This program is part of the COPD Foundation’s Pulmonary Education Program (PEP) and works to encourage COPD patients to exercise their lungs and improve their lives through the power of music.

Harmonicas for Health (H4H) presented by ACM Lifting Lives kicked off at the end of January in Murfreesboro, TN. Three-time ACM-nominated country artist Chris Janson stopped by recently to visit patients at Saint Thomas Rutherford Hospital and see the group’s progress as they have been learning to play the harmonica to treat COPD. After five weeks, the first program has come to an end and the participants have a new found hobby and remedy of treatment. The COPD Foundation’s goal is to have 25 Harmonicas for Health programs launched at various hospital PEP locations nationwide by September, 2016. Saint Thomas Rutherford was the first to launch.

“I can attest to the healing power playing the harmonica provides. As an asthmatic, harmonica playing has helped me overcome my breathing problems and make some damn good music,” says Janson.

ACM Lifting Lives is funding this program and secured Janson to come on board as a COPD National Spokesperson for the program.

About ACM Lifting Lives®
ACM Lifting Lives® is the philanthropic arm of the Academy of Country Music dedicated to improving lives through the power of music. Through partnerships with artists and strong ties in the music industry, ACM Lifting Lives develops and funds music-related therapy and education programs, and serves members of the community who face unexpected hardships through its Diane Holcomb Emergency Relief Fund. Through generous donations and the support of artists and fans, ACM Lifting Lives is able to fund everything from disaster relief and helping communities in need, to music education in schools and music camps for those with disabilities, to supporting programs that use music therapy as a means to help our veterans and wounded warriors, while providing grants to help them ease back into life. For more information, please visit www.ACMLiftingLives.org.

About Chris Janson
Warner Bros. Records/Warner Music Nashville singer/songwriter Chris Janson burst on to the scene last year with his breakthrough #1 Platinum single “Buy Me A Boat” which went on to be the 7 th bestselling country song of the year. His current single, “Power of Positive Drinkin’” is climbing the country charts now. Janson’s “overnight success” was built on ten years of honing his songwriting craft and relentlessly perfecting his live shows on the road. His dream to play the Grand Ole Opry has now resulted in more than 130 appearances. Closing out 2015 with a bang, Janson landed on multiple year-end lists, including Billboard's Top New Country Artist list (#2). His breakout smash “Buy Me a Boat” was named one of the Best Songs of 2015 by the New York Times and is the #7 Best-Selling Country Song of the Year ( SoundScan). Janson’s album (Warner Bros. Records/Warner Music Nashville) made Rolling Stone Country’s Best list. Adding to the industry recognition, he was chosen as a 2016 Next Big Thing by MusicRow, received standing ovations for his electric performance at the prestigious New Faces concert during Country Radio Seminar, received three ACM Award nominations ( New Male Artist of the Year & Single of the Year) and is up for Country Song of the Year (“Buy Me a Boat”) at the iHeartRadio Music Awards. His incredible success earned him spots on tour with Toby Keith, Luke Bryan and Blake Shelton’s 2016 Tour Presented By Gildan.