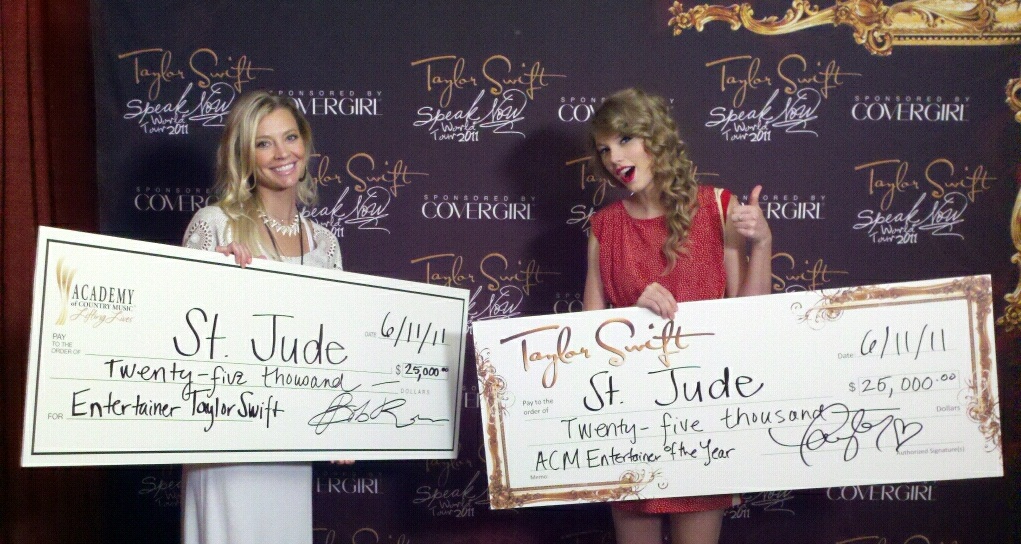 Erin Spahn, Executive Director ACM Lifting Lives, was on hand at Swift’s sold-out stadium show this Saturday at Detroit’s Ford Field, where she congratulated Swift again for her ACM Entertainer of the Year win and presented her with a $25,000 check for St. Jude, Swift’s chosen philanthropy for this gift. Swift also came prepared with her own personal check to St. Jude for $25,000, to bring the evening’s total to $50,000. Swift has donated more than $1 million to charity in the past year alone, including more than $750,000 raised for victims of the recent tornados in the Southeast and $500,000 last year to Nashville flood relief efforts.

This is the third year the ACM Lifting Lives Entertainer of the Year Matching Gift program has been in existence.  Past recipients of the grant have included the C.A.T.S. Foundation, Community Foundation for Middle Tennessee and MusiCares.

ACM Lifting Lives® is the philanthropic arm of the Academy of Country Music dedicated to improving lives through the power of music.   Each year, ACM Lifting Lives provides grants to music therapy and music education programs.  Other giving includes serving members of the country music community who face unexpected medical or financial hardship through the Diane Holcomb Emergency Relief Fund and partnering with artists to improve lives through music. For more information, please visit www.ACMLiftingLives.org.

Taylor Swift is a four-time GRAMMY winner, the reigning Entertainment Weekly and the Academy of Country Music Entertainer of the Year, and is Billboard’s 2011 Top 200 Albums Artist. She is the top-selling digital artist in music history, has had singles top both the Country and Pop radio charts, and in 2010 sold more albums than any other artist in any genre of music. With 1,046,718 copies sold in the US in the first week of release, her Speak Now album scored SoundScan’s biggest single-week sales total since 2005 and is the biggest debuting country studio album in history. With the release of Speak Now, Taylor made history on the Billboard Hot 100, charting a record-breaking 11 songs from one album in a single week. Taylor, who writes all of her own songs, has career record sales now in excess of 20 million albums and 33 million song downloads. Her Fearless album was 2009’s top-selling CD, and she was the top-selling artist of 2008.

Last year, at the age of 20, she became the youngest artist in history to win the music industry’s highest honor, the GRAMMY Award for Album of the Year. Also at the 2010 GRAMMYs, she took home the awards for Country Album of the Year, Best Country Song, and Best Country Female Vocal Performance. Her 6x-Platinum FEARLESS album is the most awarded album in Country music history.

In 2009, she was named Artist of the Year at the American Music Awards, and also became the youngest artist in the 43-year history of the Country Music Association to be awarded country music’s top prize when she took home the CMA Award for Entertainer of the Year. Taylor currently holds the Billboard all-genre records for the longest charting album of this century, for most Top 20 debuts in a calendar year, and for the largest overall airplay audience for a country-based act.

Taylor is on tour in support of SPEAK NOW, and is currently slated to play 98 shows in 17 countries in 2011. Her 15-month, 107-date FEARLESS 2009/2010 Tour sold out arenas and stadiums in 88 cities in five countries spanning four continents.

St. Jude Children’s Research Hospital is internationally recognized for its pioneering work in finding cures and saving children with cancer and other catastrophic diseases. St. Jude is the first and only pediatric cancer center to be designated as a Comprehensive Cancer Center by the National Cancer Institute. Founded by late entertainer Danny Thomas and based in Memphis, Tenn., St. Jude freely shares its discoveries with scientific and medical communities around the world. St. Jude is the only pediatric cancer research center where families never pay for treatment not covered by insurance. No child is ever denied treatment because of the family’s inability to pay. St. Jude is financially supported by ALSAC, its fundraising organization. For more information, go to www.stjude.org and follow St. Jude on www.facebook.com/stjude and www.twitter.com/stjude.