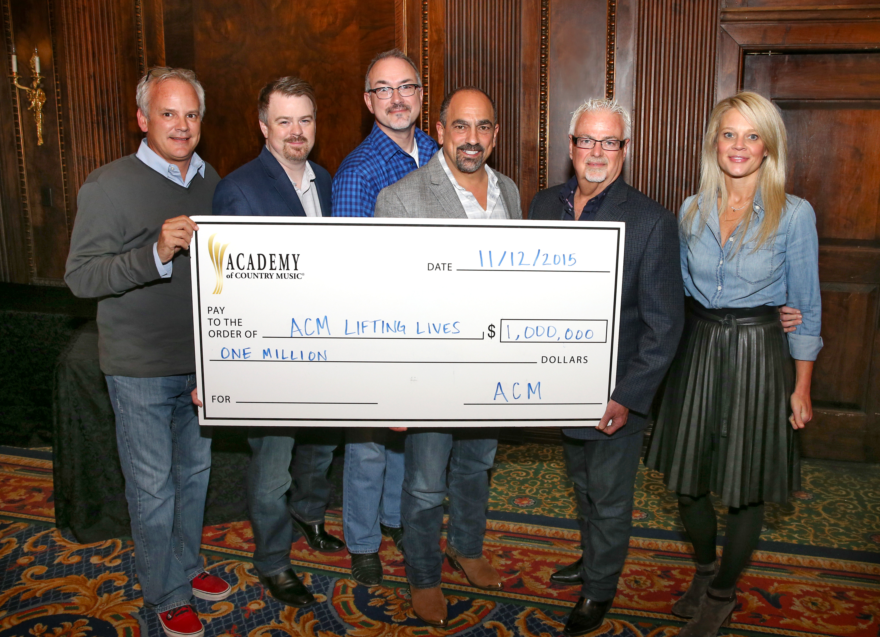 Encino, CA (November 24, 2015) – Superstar country artists played a key role in the success of the record setting 50 th anniversary of the Academy of Country Music Awards held in April.  The Awards telecast and ACM Presents: Superstar Duets in May, both on CBS, reached a massive 22.4 MILLION viewers, combined.  The ACM Awards delivered its largest viewing audience since 1998 and set a Guinness World Record™ for the most attended live Awards telecast in history, with more than 70,252 in the live audience at AT&T Stadium.

On the heels of this unprecedented success, the Academy is announcing a record donation to ACM Lifting Lives in the amount of $1 million, made on behalf of the artists who participated.  Ticket proceeds from several events in April, including ACM Presents: Superstar Duets, went to ACM Lifting Lives.

“ACM Lifting Lives has done so much in the past several years with the monies raised from ACM television specials and Awards Show-related events,” said Duane Clark, Academy of Country Music Board Treasurer. “As a Board, we’re proud to support the good work of ACM Lifting Lives – and it’s our way of thanking the artists.  They donate their time and talents to make it possible for us to raise money and continue the good work of improving lives through the power of music.”

About the Academy of Country Music

Founded in Southern California in 1964, the ACADEMY OF COUNTRY MUSIC (ACM) is a fan-focused artist and industry-driven organization, providing the financial resources to ensure the on-going philanthropic work of ACM LIFTING LIVES , the charitable arm of the Academy which works to improve lives through the power of music. The Academy has a rich history in the entertainment industry, having been founded when Southern California was a hotbed of emerging country music and when Westerns were a staple of television programing and film production.  Comprised of more than 3,800 professional members nationwide, the ACM is headquartered in Encino, Calif. For more information, log onto www.ACMcountry.com or www.ACMLiftingLives.org.

ACM Lifting Lives® is the philanthropic arm of the Academy of Country Music dedicated to improving lives through the power of music.  Through partnerships with artists and strong ties in the music industry, ACM Lifting Lives develops and funds music-related therapy and education programs, and serves members of the community who face unexpected hardships through its Diane Holcomb Emergency Relief Fund. Through generous donations and the support of artists and fans, ACM Lifting Lives is able to fund everything from disaster relief and helping communities in need, to music education in schools and music camps for those with disabilities, to supporting programs that use music therapy as a means to help our veterans and wounded warriors, while providing grants to help them ease back into life. For more information, please visit www.ACMLiftingLives.org.